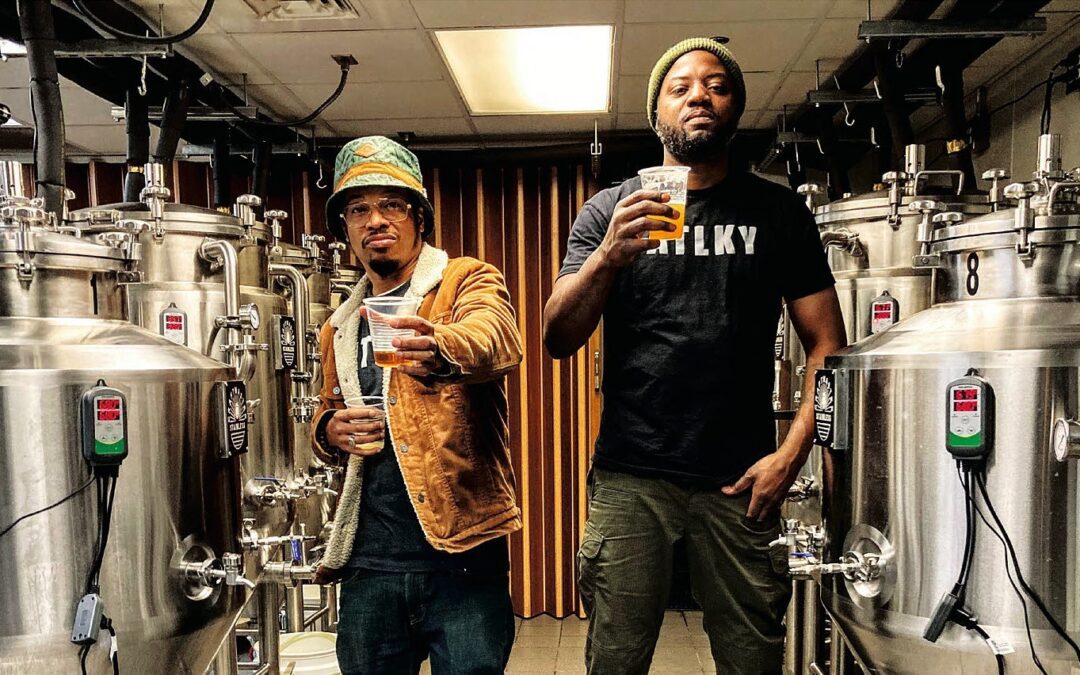 As you walk through the doors of Atlantucky, Atlanta’s newest black-owned brewery, you’ll immediately notice three things: the beer, the art, and the music. Conveniently located in Atlanta’s Castleberry Hill neighborhood steps away from the Mercedes-Benz stadium, the iconic, Grammy-nominated rap group known as Nappy Roots are continuing their legacy with the grand opening of their brewery and taproom. Originally from Louisville, KY, and now living in Atlanta, the self-dubbed “crafty rappers” fused the locations of their homes to create the name of their brick-and-mortar brewery, hip-hop expertise, and country lifestyle they naturally emulate.

Beginning as homebrewers, Nappy Roots’ Fish Scales and Skinny DeVille have consistently been involved in the craft beer industry including numerous compilations with breweries nationwide for the past five years leading to the official opening of Atlantucky. Their dream is now a reality.

While hand cutting jalapeños and contemplating the name for their limited-edition Kolsch, DeVille reflected on how they first started, saying, “We started brewing towards the end of 2016. A five-gallon pot, one burner in the backyard using city water. Now we have Atlantucky.” He continues, “So far, the response has been great; people have really been receptive to the beers.” Their flagship beers include the light-bodied Hapeville Hefeweizen, the hazy OG Wheat, and the well-balanced Mile High Pale Ale.

The 6,000 square-foot, fully operational brewery also doubles as an event facility complete with a stage that can be transformed into almost any configuration. As musical artists by trade, the Nappy Roots have devoted a portion of their brewery walls to display artwork made by local Black artists. Justly, hip hop along with jazz and R&B is on rotation throughout the venue’s speakers to keep heads nodding. And those lucky enough to attend the grand opening of Atlantucky on February 4th, saw how the stage transformed the space into a concert venue when the Nappy Roots, along with special musical guests, performed.

Cleaning the tap lines, Scales commented, “What we have here in Atlanta hasn’t been done in other cities. Atlanta has something that is very special; its diverse and people really work together here…way more than I’ve seen in other places, and I’ve been all over the world.” Taking a pause, he said from the heart, “Atlanta is welcoming to all people. This is a magical place.”

Atlantucky not only has the craft beer covered, but they also garner a collaborative relationship with local, up-and-coming food vendors like Amorous Tacos, ATL Seafood Bags, Rollin Up Eggrolls, Chicken Trap and Unbelievegan who have regular pop-ups at the brewery. It’s their mission to make every hour a “Nappy Hour” at Atlantucky.

Check out their weekly happenings on their IG @Atlantucky or visit www.atlantucky.com.